Disposable cameras were very popular before the rise of smartphones, but they are still used by many people. In fact, they seem to be making a comeback on social media apps such as TikTok.

They are easy to use and inexpensive. People use them when they want film-based photos that can be developed and printed.

What Kinds of Disposable Cameras Are Out There?

Generally speaking, disposable cameras are similar. They use film and they have a wind button that gets you to the frame. You often have a flash that can be activated by pressing a button. You will have a small viewfinder to look through. You won’t find disposable cameras with advanced features, such as a zoom lens. 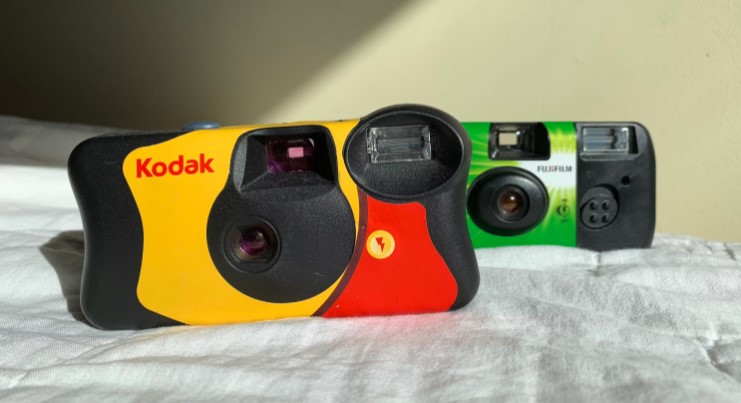 There are a few different types, including waterproof disposable cameras and standard ones. You will find slight variations in terms of the flash quality and other features. They aren’t made by a lot of companies, but they are easy to find online or at larger stores.

How to Use a Disposable Camera

Disposable cameras are easy to use. You simply follow these steps:

Turn the scrolling wheel on the right of the camera until it clicks in place. This will advance the film to the next frame so that it is ready for you to take a picture. You need to turn it to the right and you will feel it stop when you have the frame set.

If you find that you can’t take a picture, it is likely that you haven’t turned the scroll far enough. Some people also call it a thumb wheel because they use the thumb to turn it.

If you have a flash and plan to use it, you will want to turn it on before you take a picture. There is a button near the flash, and when you slide it, it will charge the flash. You will hear a sound while it charges. It takes between two and five seconds, and once you no longer hear the sound, it will be ready.

Most people use the flash when there is low light or when they are trying to shoot something further away. You don’t have to use the flash; the camera will work without it. Some cameras don’t have a flash, so you would skip this step.

3. Hold the Camera to Your Eye

Look at the light source when you line up your shot. You might be using natural light outdoors or you could have artificial lighting inside. You should try not to take a photo directly facing the light, nor do you want to be facing directly away from it.

Once you have your shot lined up, you can press down on the button on top of the camera. Try not to let the camera move around, and press the button. When it clicks, you can take your finger off the button because it has taken your photo.

Some waterproof cameras have a lever in place of a button, so you will pull it down until you hear the click. Once it finishes, you need to wind it again to set up for the next photograph.

5. Finish Your Roll of Film

You can repeat this process until you finish using the disposable camera. There is usually a window with a small number that tells you how many more pictures you can take. When it runs out of pictures, you are finished with that disposable camera.

6. Take Your Disposable Camera to Be Developed

Once you run out of pictures, the only thing left to do is take it to get the photos developed. You can go to any store that develops film for you. You can also find places online where you will mail the camera and they will return the photos to you. If you have the right equipment, you can develop the pictures at home.

Can You Reuse a Disposable Camera?

Although disposable cameras are sold as single-use cameras, you can take them apart and recharge them if you have film and a battery. You will need several supplies, including the following:

Next, you can cut the camera open with the box-cutter. First, cut the plastic, open the lid, and move the battery cover. Take the new film and rewind it from the cassette to the coil. Use your toothpicks to block the wheel from above. Then, close the lid while you hold them and use a screwdriver in the hole under the coil. You can twist it to set it.

How Long Do Disposable Cameras Last?

Disposable cameras normally last two years, but if you store them in a cool and dry environment, they can last up to five or six years. The film is what expires and it can lose quality if you store it too long. You should try to use them within a few years to get the best-quality photos.

Disposable cameras are still somewhat popular and they are easy to use. You can get some great photos, especially if you are looking for something to shoot underwater. Always be sure to wind the film and let the flash charge before you take a photo. Once you finish the roll, get your photos developed and enjoy them.