Many people go on vacation and they stop in to see temples. They are often dismayed to find that photography is not allowed inside. This can also be the case in some Catholic or Orthodox churches. As disappointing as this may be, it is important to respect their rules.

Temples are popular attractions, and with the privilege of visiting comes the expectation that you follow their rules. Take a look at some of the reasons why photography is not allowed in temples.

The primary reason why photography is not allowed in temples is that they are sacred. They are holy places to those who worship there, and they contain holy objects such as images and sculptures that represent their deity.

They consider it a sign of disrespect to take photographs inside such a holy place. Temples also have consecrated items that require reverence, and photographing these items is considered disrespectful. They often prohibit mobile phones and other electronic items from temples as well.

Temples Are There for Worship and Meditation 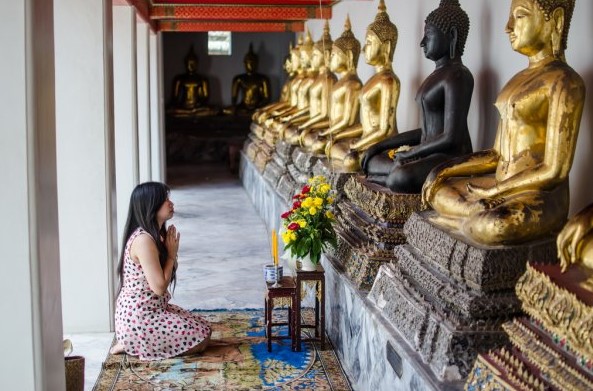 If people are in the temple worshipping or meditating, taking photographs can be very disruptive and distracting for them. Worshipping and meditation are accomplished when people are still and focused, and there shouldn’t be noises or flashes happening in the background. People who are worshipping will be unhappy if you disrespect this policy by snapping photos while they are praying.

Photographs Can Cause a Security Issue

One of the reasons why tourists and others come to see temples is that they are amazing structures, and they often contain incredible statues, art, paintings, and holy objects. Much of what is inside has significant value; they might have objects made of solid gold or other very valuable materials.

If they allowed photography, people could take pictures and post them online. They might become very public, and thieves could plan to break in and steal these items. Seeing photographs would let them know the layout, which makes it easier for them to make a plan.

It could also cause a security issue because detailed information about the interior of the temple could be made public. Photographs might show where exits are located, where security cameras are located, and how to get around once inside the temple.

If this information makes it into the hands of thieves or worse, they could take the opportunity to harm the temple or the people who worship there. It is okay to enjoy seeing the temple, but you should never take photographs.

Some People Believe That Photographs Take Energy From the Deities

What Kinds of Temples Are There?

A temple is a place that is built for worship. Different religions use different names for their temples. For example, Christians call their places of worship churches. The Jewish temple is called a synagogue, and the temple of Islam is called a mosque. There are temples for Hindu and Buddhists as well, and they are usually called temples.

Some temples were built hundreds of years ago, and they are beautiful places. However, it is important to remember that they were all built as a place of worship for the people who worship there. No matter what religion worships in the temple, you must respect their rules regarding photography.

Are You Ever Allowed to Photograph Temples?

There are some temples that will allow you to take photographs. You need to get permission before you take your camera out, and respect any restrictions they may have. If you are granted permission, make sure that you respect anyone who is there to worship or meditate.

If you have permission ahead of time, you should plan your trip at a time when people are less likely to be worshipping. Find out what their rituals are and when they gather. Do not take pictures of the people who are there for religious reasons.

As tempting as it might be to take a photo of the sanctum, you should not. No temples allow it and they will get very angry if they catch you doing it.

Can You Get Permission to Take Photos at a Hindu Temple?

You can’t take photos at Hindu temples. It is strictly prohibited because they believe that you should only come in to focus on the Holy Presence. People are there to embrace their spirituality and they won’t allow photos.

Are Phones Allowed in Temples?

Phones are rarely allowed in temples. Most worshippers believe that it is disrespectful to have a phone inside the temple, and Buddhists actually believe that the mobile phones are harmful to the divine. They are annoying and distracting, and people use them to take photographs.

If you try to bring your phone into a temple or take pictures where it isn’t allowed, you can have a problem. They might ask you to leave and they sometimes even guide you out of the temple. You should always respect the customs and traditions of the people who worship in the temple.

Whenever you visit any sacred place, you need to be aware that you are a guest. These structures were not created for human pleasure; rather, they were created as a sign of respect and honor to the deity that is worshipped there.

It doesn’t matter what kind of temple you visit; you need to make sure that you have permission before taking any photographs. If you are granted permission, then be sure to respect the guidelines that they provide.